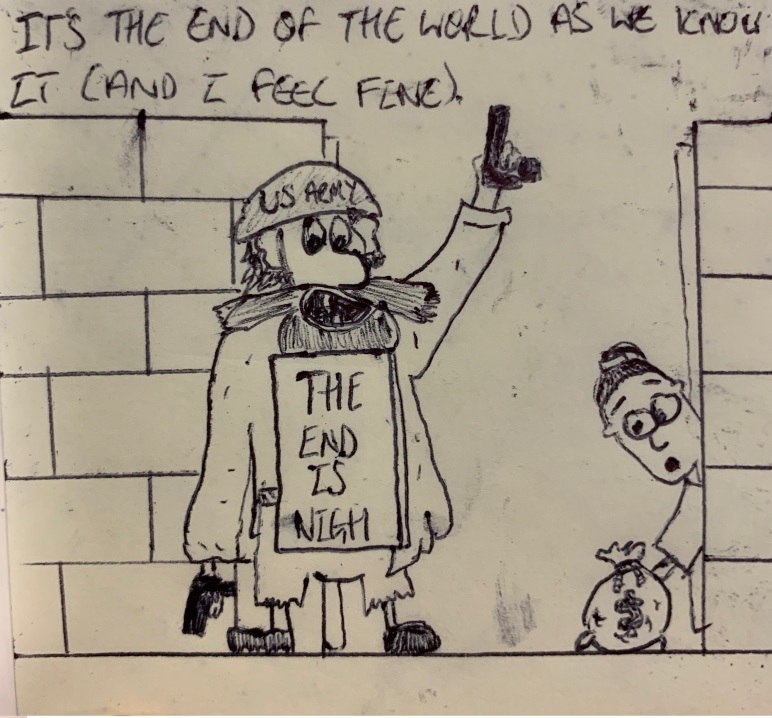 Darrell Tate prophet, founder and Leader of the Holy Church of the Fragile Earth lay still, enjoying the warmth of the two naked bodies pressed up against him. While his time may be short he could honestly say he’d never been happier. ‘God if you’re listening let this moment last forever,’ he thought. As if in answer there came the muffled thump of an explosion somewhere across the compound.

“Dick,” croaked Darrell stretching an arm out to his bedside table in search of something to drink. His hand roamed over glass bottles, ceramic mugs and a myriad of items of discarded clothing before closing on something soft. He gave it an experimental shake and was rewarded with the satisfying slosh of liquid in plastic. Without opening his eyes he unscrewed the cap and took a long drink. It was warm and stale but to Darrell’s parched throat it tasted like the finest champagne. “And all is well with the world again,” said Darrell crushing the bottle and tossing it away. As is hit the floor somewhere across the room an alarm began to wail deep in the heart of the compound.

Darrell opened one eye and looked up at the giant clock on the wall above his bed. One hour forty three minutes and fifty five seconds until the end of the world. He let out a sigh and, not for the first time, cursed himself for not picking a date another five years further out. Hell, one year further out. Even a month would have sufficed, but it was too late now. There was another thump closer this time and dust started to rain down from the ceiling obscuring the clock for a moment. He heard the boots of men running and somewhere in the distance but coming closer the wail of sirens.

“Father, you in there?” called Bo as he pounded on the thick, metal door.

“Speak of the devil and he shall appear,” muttered Darrell squeezing out from under the two naked girls who continued to snore softly still sleeping off the previous nights excesses.

“Father Tate! Are you in there?”

“Yes I’m hear Bo God damnit,” cursed Darrel as he rummaged through the mess searching for a clean pair of pants. “I told you I wasn’t to be disturbed.”

“But Father, it’s those bastards from the government. They’re hear to shut us down!”

“They can try but by the time they have the proper permits it will be too late I’ll be miles away from… I mean… It won’t matter.”

“Don’t worry they won’t get passed us,” said Bo followed by a metallic noise that sounded ominously like the cocking of a shotgun.

“Bo, I hope you’re not going to do anything stupid,” said Darrell finally finding an old t-shirt and a battered pair of jean shorts that while scandalously short would cover his unmentionables long enough for him to get hell out of dodge. “We talked about this, God told me no fighting with the unbelievers remember.”

“I don’t care what Bubba and Randy said,” snapped Darrell as flipped back a painting of himself to show the safe hidden behind it. “Now, you just go down to the main hall with everyone else…”

“Aww, but Father I don’t want to kill myself.”

“No but’s Bo I…” Darrell paused the last digit of the code unentered. “Wait. What do you mean kill yourself? Who said anything about killing yourself?”

“Well, when I came up Maggie-Mae was passing out the emergency Kool-Aid.”

“What emergency Kool-Aid?! Does nobody tell me anything? I’m supposed to be the bloody prophet!”

There was another rumble of an explosion followed by the rat-a-tat tat of automatic gunfire.

“Christ what’s going on out there?” said Darrell heading over to the window, the safe momentarily forgotten. “We’re a peaceful cul… I mean religion. No suicide pacts, no bombs, no gun fights with the feds. Just nice normal tax sca… ah… I mean religious stuff.”

There was no answer.

Darrell crossed the room and flung open the door in time to see Bo’s back as he ran off down the stairs, the barrel an Ithaca 37 poking out from over his shoulder.

“Bo get back here God Damnit!”

“I’m a comin’ Randy,” yelled Bo as he reached the bottom of the stairs and hurried in the direction of the front gate.

There was a moments silence and then a huge whump and somehow Darrell was on his back his head swimming. The world spun around him andd Darrell could see the sky where the ceiling used to be through a haze of smoke and dust. His ears were ringing and he tasted blood as he dragged himself to his feet and threw himself down the stairs. He needed to see what the hell was going on for himself.

Darrell crossed the main hall keeping his eyes averted from the kitchen where Maggie-Mae had last been seen and crouched in the doorway to the outside. The compound was in uproar, it looked like someone had kicked open an anthill full of ants in flapping white robes. Initiates ran in all directions through the haze of smoke, some carrying weapons other helping injured brothers and sisters. All of them with wide eyes and wild looks on their faces. At the entrance to the compound Bo, Randy and Bubba crouched behind a makeshift barricade exchanging fire with black clad feds in full tactical gear. One was initiate wielding an AR-15 and firing feverishly into the ranks of the fed like something from the end of Scarface. Darrell tried to call out to stop him but before he could the man was peppered with bullets, blood staining his once pristine white robe. Darrell couldn’t even remember the poor saps name.

“Bastards!” shouted Bo as the initiate fell poking his shougun over the barricade and firing blindly in the direction of the feds. As he did Bubba tossed something into the crowd of black clad figures who dived out of the way and it detonated with a deafening roar.

‘Grenades?! Where the hell did they get grenades?’ thought Darrell. They were supposed to be a peaceful cul… religion. Yes, definitely a religion, not a cult. The intensity of the feds firing on the barricade increased, bullets pinging off the thick steel in every direction. One clipped the door frame by Darrell’s head and it was then he decided to get the hell out of there.

Taking a deep breath he dashed towards the rear of the compound keeping low to avoid the gunfire, and his ex-followers. Not that he thought anyone would recognise him out of his robes but he didn’t want anything that would draw attention to him right now. Covered by the smoke and milling bodies he managed to make it to the back of the compound undetected and unshot. Once there he found the small storeroom near the back that had a big sign on the door saying “Private: No Entry by Order of Founder Tate.” He pulled on the handle but the door didn’t budge.

“Crap, padlock,” he said looking down at the large chunk of metal barring his escape. He patted his pockets but they were empty his keys must have still been in his robes. There was another explosion behind him and when he looked over his shoulder he saw a swarm of feds bursting through the smoke and tackling white robbed initiates. The barricade and its defenders was gone. In desperation Darrell scanned the floor looking for anything he could use to force the door and eventually came up with a large rock. Using both hand the brought the rock down, once, twice, thrice before the padlock shattered and the door swung open.

He leapt through the door swinging it shut behind him then ducked through a small gap between a large stack of boxes. At the back of the darkened room in one corner was a small door. Darrell pulled it open and crawled through into a narrow tunnel. He crawled for what felt like hours through the dark with the screams of the wounded and the rattle of gunfire hot on his heels. At length the tunnel started to widen and after a few hundred feet Darrell stood in front of a large wooden door. He pushed it open fingers and toes crossed. The alleyway was empty.

“Man that was a close one,” said Darrell as he emerged into the sunlight and walked calmly off down the street away from the smoke and the fire that made up all that was left of his fledgling religion. “I’ve got to get out of this game. Well, the end of the world stuff anyway. Maybe next time I’ll come up with a nice friendly cul… religion. Something wholesome and quiet. With no grenades. Yes definitely no, grenades.”